The containment policy I think is the key to understanding when and how we got involved in Vietnam. Before 1941, our interest in that area of the world had been very slight, but once we were committed after 1947 to a policy of global containment, then Vietnam suddenly becomes very important to us because the insurgency against the French at that time is led by people who happened to be communist and this gives a revolution in a remote part of the world a connection with communism and is the explanation really why a whole series of commitments were made.
George Herring, Readings in United States History Since 1877

In 1954, the United States became entangled in Vietnam in an effort to stop the spread of communism. As medias advanced during this period, the escalating conflict in Vietnam received extensive coverage; this eventually created mounting tension as it was the first ever televised war. With knowledge of both the military's rare successes and tragic losses, many Americans protested against drafting and any military training in schools in the 1960's. Although the war is considered America's most unpopular war, only a minority (see slideshow) of United States citizens radically sought to oppose the government's involvement in Vietnam. Nevertheless, these few dedicated groups remained vocal about their beliefs, especially on college campuses. 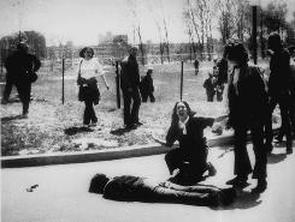 Mary Ann Vecchio cries out beside a student shot at Kent State University in Ohio.
One of the most notable protests occurred at Kent State in 1970. Students who did not favor the war rioted as then President Nixon announced his invasion of Cambodia, going as far as setting the ROTC building there aflame. Soon after, the National Guard was asked to mediate the situation. When protesters refused to leave, soldiers fired: four protesters were killed and nine were wounded. News of the shooting aroused public outcry nationwide. The existent lack of freedom and violence ultimately triggered requests to end to ROTC. This became the turning point for the school administrators to decide what true purpose the program should answer.
Former Waukegan High School activist, Claudia Freeman, explains why she protested.
To answer changing viewpoints during the Vietnam era, WHS opted to redefine its ROTC program. ROTC became an elective (optional) course taught by retired military officers instead of active members of the forces. Additionally, in 1975, the program began to enlist female cadets. Reasons for accepting female students into ROTC still remain unspecified, but public opinions from students and perhaps the shortage of registered cadets as a result of protests against Vietnam, could have encouraged the administrators to start recruiting them as well.